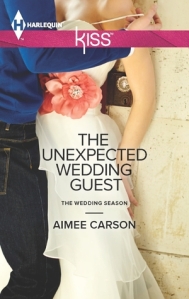 “Surprised to see me?”

Getting caught in her wedding dress by her drop-dead-gorgeous ex-husband is Reese Michael’s worst nightmare. Especially when her perfect-on-paper fiancé then cancels their wedding!

Reese has spent years trying to forget how her marriage to Mason Hicks crashed and burned—yes, their chemistry was incredible, but a girl can’t live on lust alone! And what’s a jilted bride supposed to do when the one man she could never forget is back in her life, as irresistible as ever? Mason might be her own personal brand of Kryptonite, but surely life is meant to be lived a little dangerously…?

OK I have to admit, I have never read a Mills and Boon book. In fact, I would have scoffed at the very idea. You see I remember seeing them lined up on my mums headboard when i was litte, like around 10 – so we are talking 20 years ago here. The covers of damsels in distress or with a swept away look and the hero coming to save the day. Well thats what I remember – as to whether or not the covers actually looked like that I had no idea.

One day out of the blue I got an email from Mills and Boon. They were launching their Modern Tempted line and wanted to know if I would be interested in joining in with the launch. Firstly I did a happy dance, its always a good thing to get acknowledgement for what you do never mind be told that you do it well. Secondly I thought mmmm Mills and Boon. Anyway I am not one to turn down a book. So I said “bring it on”.

I have been meaning to read one for a while, I had actually started but it disappeared from my house mmmm. So today I said “right time to get down to business”. I decided I was going to read Aimee Carson’s book The Unexpected Wedding Guest.

As I said, I wasn’t what to expect. Actually that’s not quite true, I was expecting fluffy, over the top dramatics and airy fairy dialogue. That’s OK though, I am woman enough to admit when I am wrong. I wasn’t just off the mark here, I was off the grid. Apart from the fact that it was published by Mills and Boon it was every bit as good as all the other books I have read. It was gritty, exciting and had a fantastic story line. I don’t know how Aimee did it, perhaps it was just the anticipation but I was heating up when there wasn’t even anything steamy happening in the story line. If anything I thought it would have been raunchier but in fairness that would have made it tacky. It had the perfect balance of romance, angst and steam.

It is short enough in that I read it in a few hours but all the bases were covered. At no point did I feel that it was rushed or that anything had been left out. It’s edgy, sexy, modern and fits perfectly with the way the modern market is heading, especially with the eBook phenomenon. Well done to Harlequin and Mills and Boon for taking this label and while staying true to themselves (or so i’m told) yet embracing what readers want! They have certainly gained a new reader in me!

I also found proof in this book that reading broadens your vocabulary. Aimee taught me a new word that I cannot wait to use. FUBAR. What is FUBAR? I know you are asking because I had to go and ask Aimee, FUBAR = Fucked Up Beyond All Recognition. LOVE IT!

I absolutely cannot wait until I get my hands on the next book in the series, Girl Least Likely to Marry