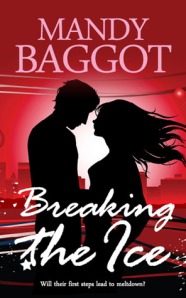 When routine driven box office assistant Samantha Smith meets the stars of ‘Skating on Broadway’ her life is turned upside down. Immediately attracted to the infamous lead skater Jimmy Lloyd, Samantha does her best to deny her feelings. But when all you can do is burst out laughing and hyperventilate every time you’re under pressure, keeping things under wraps is a hard task. When the future of her beloved Civic Hall is threatened Samantha must rise to the challenge to ensure its survival. Constantly scrutinised and criticised by her zany sister Cleo and her brogue wearing boyfriend Jeremy, can Samantha save her job, save the Civic Hall and stop her panic attacks just long enough to give her away her heart

Breaking the Ice is a book by award winning writer Mandy Baggot. I wasn’t sure about this book before I read it. I hadn’t heard of Mandy before (sorry Mandy) and I had noticed on twitter that someone had tweeted a link to the book as it was free on Kobo that day. I never find the special offers or free books on Kobo for the type of books I read so I went straight in and got it. Usually I do not read a book on a whim, someone I have similar tastes as will recommend it or I will have read about it on another blog but this was just a reflex to seeing the word FREE lol.

Anyway I settled down to read it, keeping an open mind. Well I have to admit, it put a smile on my face :D. Its a really lovely story. Sometimes you just need to sit down and read a romance. I said it recently when writing about something else, you often don’t realise you miss it until you are right back in the middle of it again.

We follow the story of Samantha Smith the shy and retiring box office clerk at the Civic centre, who lets be honest basically runs the place. She meets the star of the ice show ‘Skating on Broadway’, Jimmy Lloyd, who is instantly drawn to her. Only she doesn’t see it. She is chronically shy, has panic attics and absolutely no self esteem. When she learns her beloved civic centre is to close they work together to try and save it. While the pair work together and he breaks down her defenses we learn all is not rosy in jimmy’s life either – will Samantha be able to help him fight his own demons?

Mandy does a great job of making us feel everything that’s going on in Breaking the Ice. She brings us deep into the story and we laugh when they laugh, blush with embarrassment and feel the pain when things don’t go exactly right. I read this story in less than a day, you just don’t feel the time going. The only thing that disappointed me was that it had to end. The sign of a good book!

Mandy shows us that no matter who we are, what we do or whatever our problems are that having faith and believing in yourself really is half the battle! 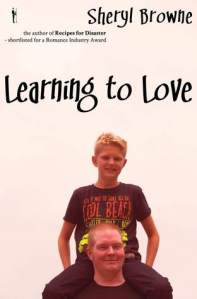 Widower, Dr David Adams, has recently moved to the village – where no one knows him, ergo there’s no fuel for neighbourhood gossip – to start afresh with is ten year old son, if only he can get to a place where his son wants to speak to him. Angry and withdrawn, Jake blames his dad for the death of his mother, and David doesn’t know how to reach him.

Andrea Kelly has too many balls in the air. With three children and a “nuts” mother to care for, her fiancé can’t fathom why she wants to throw something else into the mix and change her career. Surely she already has too much on her plate? Because her plates are skew-whiff and her balls are dropping off all over the place, Andrea points out. She needs to make changes. Still her fiancé, who has a hidden agenda, is dead-set against it.

When Andrea’s house burns mysteriously to the ground and Andrea and her entourage are forced to move in with the enigmatic Dr Adams, however, the village drums soon start beating, fuel aplenty when it turns out someone does know him – the woman carrying his baby.(

Truth, lies, deception, love, hate, anger and joy – they are all there in Sheryl Browne‘s Learning to Love. In fact I am not sure there is an emotion that isn’t covered.

A little boy has lost him mum and his relationship with his father is at an all time low. He blames his dad for bailing out when his mum was sick – who could blame him. David – the dad, couldn’t come to terms with the decision his ill wife had made and life being the bitch that she is – meant he didn’t have time to rectify the mistakes he had made. Now he had to live with the consequences.

Across the road we have Andrea who is fighting to find a little bit of herself after years of raising her children and now caring for her mother who is going senile. Or is she? Her partner and soon to be fiancé is doing his damnedest to have her mother sent to a nursing home, a plan that Andrea is vehemently against. Just why is he so eager?

Sophie and Ryan are your typical teenagers, at each others throats and winding each other up with almost every word that comes out of their mouths. Chloe is the baby of the family, loved by everyone bringing joy to each character in the story. Dee the ‘senile’ mother is maybe not just as dotty as she appears and really brings about some comic relief.

Finally we have Sally. After splitting up with her husband cos he can’t keep it in his pants she is feeling lonely. Hasn’t she heard the mistress’ curse – how you win him is how you will lose him? She has her eyes set on Dr David Adams and she will do whatever it takes to get him.

So many parts of this story I could relate to. Grief is a terrible thing and it can make people act out and behave in ways that are extremely unlike their character. As can fear. The things people will do out of fear and desperation can shock us to our cores. Reading this story will remind us that we never really do know what is going on behind closed doors. While you are on the outside looking in everything looks happy and problem free. Hell the people on the inside might not even see what is going on. Never mind reading fiction – we only have to watch the news to see that.

It didn’t take me long to read Learning to Love, Sheryl Browne has written it so wonderfully that it proved very hard to put down. I was in the car on a four hour journey when my reader died. I almost cried. I am sure I was sitting there, bottom lip stuck out like a pouting teenager sulking. Lightbulb moment!!! I had my laptop with me and I had the book downloaded on to it. So there I was sitting with the laptop reading with my reader hanging out of it charging. Where there is a will there is a way!

I suppose I read the book over the course of Saturday and a small bit on Sunday morning, I had gone home for the weekend and hadn’t seen my family since last December. To say they were giving out to me for having my head stuck in a book the whole time was an understatement. The book is just that good. You know when you say, “I’ll just finish this chapter” cos that feels like a stopping point, you can’t stop reading mid chapter. Then you start into the next one without even thinking about it. That was me with Learning to Love. I was lost in the story. Sheryl Browne brought together all these individuals and tied them nicely together. It was fluid – nothing felt forced or that there were bits being left out. It was completely natural. Also things were over romanticised or exaggerated, this was a story about real life with real life thoughts and feelings.

The only thing that disappointed me about Learning to Love was that there was no epilogue. Call me pernickity but I feel like I have to have an epilogue or the story doesn’t feel complete. So maybe? Just maybe…

Twitter to the rescue. I asked Sheryl on twitter “Is that the end of their story” to which she replied “It’s only the beginning” which resulted in a “whoop whoop” reply from me! So Sheryl I will forgive the epilogue just this once in trade of another book!!

I highly recommend this book folks, just remember all may not be what it seems!