….then today would be the day that we would be having a picnic.

Well I can smell lunch and I have just spied bubbles, courtesy of Carmel’s best friend Anne. So I suppose you could call it a picnic of sorts. 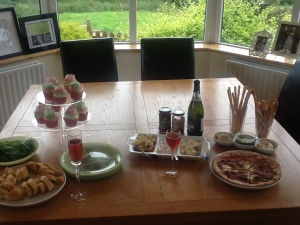 Just a classy one. Nothing else would do for my wonderful friend, Carmel Harrington, on this the publication day of Beyond Grace’s Rainbow with Harper Impulse, a digital imprint of Harper Collins. 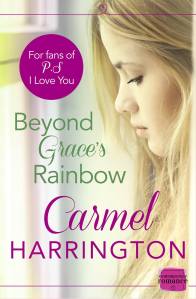 So here is what the book is about

Beyond Grace’s Rainbow is a poignant story about a young mother’s battle with cancer. Single mother Grace Devlin faces what will be the biggest fight of her life and the stakes are high. She cannot contemplate leaving her adorable little boy Jack all alone in the world. Unfortunately for Grace her best chance of survival is to receive a bone marrow transplant, so she embarks on a heart breaking search for her biological parents, as she was adopted when a small baby. This search will unravel a web of lies and deceit that has spanned over thirty years.

And just when she thinks life can get no more complicated, Jack’s father Liam is back in town full of remorse and he’s made it clear that he’s not leaving until he’s won her back. Liam was the love of Grace’s life but can she trust him ever again? Helping Grace muddle her way through her cancer treatment and complicated love life are her friends – Tara, Sean, Abby, Tom and Gerry. Tara is Grace’s cousin and is happily married to Sean but they are desperate for a baby of their own; Abby, Grace and Tara’s friend from college is single and looking for her one true love which is proving difficult, whilst Tom would be happy if his boyfriend Gerry for once didn’t max out their credit card! Beyond Grace’s Rainbow will bring the reader into Graces world where friendship, courage, loyalty, laughter and above all love are abundant. The story will bring you on an emotional journey with Grace and her friends that will have the reader both laughing and crying at the turn of a page.

This post isn’t a review, I did that a long time ago and you can check it here. I also interviewed Carmel and you will find that in the same post, though I will be interviewing her again in the coming weeks to talk about how things have changed since then.

What I am writing this post for is to tell everyone how absolutely delighted I am that Beyond Grace’s Rainbow and Carmel herself were signed under the Harper Collins umbrella. How delighted I am about how much more recognition the book is going to get, and the fact that Harper are also launching it along with the other Harper Impulse titles over in the United States. I am not going to say that this has made me proud of Carmel. Why? Because I was already proud of her. I was proud of her that she took the decision to self publish, to put herself out there. It’s a very brave thing to do. Without the backing of a publisher you could well be setting yourself up for a fall. I am also proud of her that she believed in herself. She would not back down and would not give in. I am proud of her that she didn’t get all negative when she faced rejection. She drew a line under that publisher and waited on word from the next one. I am proud of her because she worked for this. Because she put the work in and now she is seeing the fruits of her labour.

Today is Carmels day and I hope she enjoys every minute of it. She deserves this! 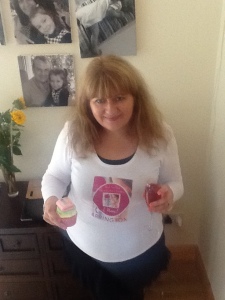 Today joining me on After the Final Chapters to give us an insight into her reading obsession is Stephanie Khani. Stephanie is the author of The London Diaries Blog

Hi Stephanie, tell us a bit about yourself

Hi there! Well, I’m originally from Louisville, Kentucky but moved to London just under five years ago after I married the love of my life! I’m still getting used to saying “pram” instead of “stroller” and “biscuit” instead of “cookie” but I’m getting there! I’m an avid blogger and love to read and write. I’m just getting into cooking and baking as well and seem to have a knack for it… or so says the bathroom scale!

Have you always been an avid reader?

Oh my goodness yes. My grandparents (probably my most favourite people in the world) read to me at a very young age and I just sort of picked it up from there. Even as a kid I always had a book handy for car rides and for school. Now I travel a bit lighter with a Kindle (after shunning one for so long!) but am still constantly reading on the bus, in the bath, at lunch… I never stop!

What is the first book you remember reading?

Ha, that’s easy! The first book I remember reading was “Henry’s Awful Mistake” by Robert Quackenbush. I loved that book… partially because it was hilarious and also because my surname before I got married was Henry, so as a kid that was pretty impressive. I actually still have the copy of “Henry’s Awful Mistake”!

What is your preferred genre?

My tastes have most definitely changed over time… I used to scoff at the Romance and Chick-Lit genres and think of them as fluff and unintelligent. As I’ve gotten older, I’ve definitely learned to appreciate both so much more and actually enjoy them! At the moment, I’m really into “bonkbusters”, particularly Victoria Fox and Shirley Conran (if you haven’t read “Lace”, you absolutely must). Overall, I’ll have to cop out and say Literary Fiction as it’s such a broad umbrella genre.

You are an unpublished writer, would you ever self publish?

Self publishing takes a LOT of guts and I tip my hat to anyone who has the cohones to put themselves out there like that. Self publishing is a scary world and right now I’m not emotionally strong enough to handle the stress and inevitable criticism that comes with it.
That being said, I wouldn’t say no to self publishing once I have a finished piece that is completely polished and that I’m totally proud of.

Who is your ultimate book boy? Feel free to give a visual 😉
Oh, okay then… I’ll admit that I’m absolutely in love with the gorgeous Jason Stackhouse from True Blood. I’ve only read the first two books but I’m a big fan of the show and Ryan Kwanten is just beyond gorgeous perfection. 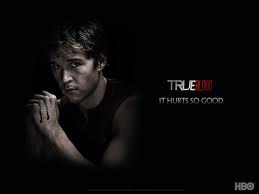 What is your favourite book?

“The Heart is a Lonely Hunter”by Carson McCullers is hands down my favourite book of all time. I think I’ve read it once a year since I was in high school. There’s just this quiet humanity to it that just left me stunned when I read it. And to think that McCullers was only 23 when she published such an amazing book really impresses me.

Which book would you love to see made into a movie?

When I was a teenager I went through a really tough time finding my own identity and sorting out who I really was. Add a backdrop of family issues and you get one confused kid. “I Was a Teenage Fairy” by Francesca Lia Block was a book I read over and over and over so many times that I had it memorised. I would absolutely love to see it as a movie… Block’s use of language is just gorgeous and I could only imagine what it would look like brought to life.

Who would play the main character?

I almost hate admitting this but I could see Miley Cyrus playing Mab She’s gritty and real and a punk and I can just see Cyrus fitting the role really well.

What is your favourite line for a book?

Again, I’m going to have to go with “I Was a Teenage Fairy” here… the first line of the book is just so cool.
“If Los Angeles is a woman reclining billboard model with collagen-puffed lips and silicone-inflated breasts, a woman in a magenta convertible with heart-shaped sunglasses and cotton candy hair; if Los Angeles is this woman then the San Fernando Valley is her teeny-bopper sister.”

What, in your opinion, has been the worst adaptation of a book into a movie?

There are so many! I really didn’t like the adaptation of Neil Gaiman’s “Stardust.” The book was so magical and beautiful and I just didn’t get that from the movie at all. I’m a huge Neil Gaiman fan and his books are so amazing I think it would be hard to equal that on screen.

What was the best?

Oh, definitely “The Princess Bride” by William Goldman. I love the book (I own two copies!) and the movie is one of my favourites. The casting alone was brilliantly done!

If you could spend the day as any character who would it be?

Oh that’s so tough! I have to pick two and both are from children’s books! I’d have to go with either Matilda from the Roald Dahl classic or Harriet from “Harriet the Spy”. Both girls are such strong, positive female characters and growing up I really admired them for their gumption and their bravery.