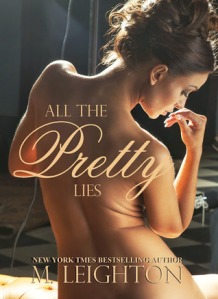 All the Pretty Lies

Her…
Sloane Locke has led a sheltered life. However, with a history like hers, she can understand why her brothers and her father want so much to protect her. She has gone along with it for twenty long years, but those days are over. For the girl who never makes promises, Sloane has made a pact with herself that things will change on her twenty-first birthday. So when the clock strikes midnight, Sloane strikes out to spread her wings and break a few rules.

Him…
In addition to inking skin, Hemi Spencer possesses many talents. Controlling himself has never been one of them. It’s never had to be. He’s lived a life of indulgence for as long as he can remember. Right up until tragedy struck. Now, he’s nothing but controlled. He’s a man on a mission, one who will let nothing and no one stand in his way.

Them…
Nothing in their lives could’ve prepared Sloane and Hemi for what they’d find in each other—distraction and obsession, love and possession. But the one thing they can’t find is a future. Neither one has been totally honest. And they’ll soon learn that the devil is in the details. In the details and in the lies.
How far will two people go to live in the now when the now is all they’ve got?

The only other books I have read my M. Leighton are those that make up The Bad Boys series and well we all know what I thought about those. Heineken anyone? So for me, this book had a lot to live up to. I was really excited to start reading it. As soon as it became live it took up residence in my bookshelf. It took me a few days to get round to reading it and unfortunately it has taken me this long to review it.

It took me slightly longer to get into. I was suffering a massive book hangover and hadn’t read in a few days, you know how it is. Now when I say a little while, I mean a couple of chapters. When it got a hold of me though, it did not let go. I knew the whole way through the book that they both had secrets. Michelle threw us crumbs, just enough to have us guessing and almost speed reading to get to the answers. Just enough to keep us interested. I of course was trying to piece everything together, and even at times found myself zoned out trying to make sense of it all. I didn’t know enough though to piece it together but that didn’t stop me. The anticipation was brilliant. And I was wrong of course. Which is amazing. It means that the book wasn’t at all predictable. Especially that end bit. I was sure I knew what the cause would be, but nope I was wrong. You know when you read a book and you say I knew before we were told…. well that isn’t this book.

Haven’t read it and don’t have a clue what I am talking about? Well that’s cos I don’t want to spoil it for you. Want to find out what this waffle was all about? Click here

All the Pretty Lies is a great book. It has mystery and suspense, romance, angst and of course sex. We love a book with a bit of sex here at After the Final Chapters. I also love the fact that the book is told from Both Sloane and Hemi’s points of view. I love to know what is going on inside of the heads of the characters. How they each think about the same situation. How they can both be thinking the same or totally opposite. Things we wouldn’t be aware of otherwise. What else do I love about this book….

The balls. And I don’t mean Hemi’s, though…. No I mean Sloane’s. She has been mollycoddled ALL her life by 4 over protective males. She has decided NOW is when she starts to live her life. She isn’t afraid to go toe to toe with whoever gets in her way.

My favourite line in the book

I was on the bus and I started laughing out loud. I got funny looks. I thought mmm Michelle must’t be a fan lol. Its one of my favourite book lines.

That there is more to come…Oh yea baby!