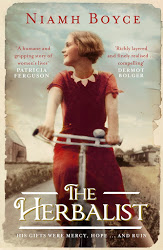 It is 1930’s Ireland and out of nowhere appears a dark stranger. Setting up a stall in the marketplace selling his wares. A Doctor he claims to be, a Herbalist. The women love him. All the women no matter their age or class. Mind you those with class attend in secret; they couldn’t be seen to be associated with ‘That Kind’. Emily though, Emily is taken by him the first time she sees him. Falls in love or so her young mind would lead her to believe. He would be her saviour, the man who would take her from this dull place and make her someone people would look up, someone people would respect. However, Emily isn’t the only one with such ideas; the women of the town are fawning over him. Buying his lotions and potions – thinking he was sent from above. Could heal anything the Herbalist could.

One day Emily discovers the truth about the Herbalist and she is shaken to her very core. Who is this man? The man who was going to take her away from this life, make her a lady, his Empress. Where had he gone or had he ever been there to begin with? Emily is a young girl she may be from a working class family but she has morals, she knows right from wrong. She loved the Herbalist would do almost anything for him. But could she do this? Could she turn a blind eye let him continue to destroy or does she take measures to make him pay for the sins he committed. And if she does decide to make him pay what will become of her and again what will become of her if she doesn’t?

The Herbalist is the debut novel by Irish author Niamh Boyce. I have seen it referred to as ‘electrifying’ and I would have to agree. Nothing less than 5 stars would do this book justice. I have never read such a story, or a story that took a similar route. As I have said before I hate predictability and this book is going to take you places that you never would have dreamed of. I can say no more, you wouldn’t thank me for it and I am sure Niamh certainly wouldn’t.

The book is packed with emotion. I wasn’t far in on the night I found myself an emotional wreck, sobbing my heart out and needing to put the book away. It didn’t stay away for long, I was hooked and I needed more.

The Herbalist is set in 1930’s Ireland though it could be today. With the exception of particular views and fashions from the time many attitudes are the same as they are today. The book deals with small town mentality and as someone living in a small town I can relate quite a bit so that certainly hasn’t changed in the last 80 years. It was interesting to read the story and find that a lot of issues that were raised are issues that are still so prominent today. Nothing changes.

I don’t know what genre I would class this book. It certainly doesn’t fall in to my usual Chick Lit or New Adult categories. I did ask Niamh Boyce what genre she would place it in and she wasn’t so sure either and jokingly suggested ‘A damn good read’. You know I think that is the perfect genre for The Herbalist. I am looking forward to more from Niamh; she has set herself a hell of a bar!

Leave a Reply to After the final chapters Cancel reply