For the first time, The Wrecked and Ruined Series is available as a box set. One accident. Four lives. Forever changed.

It was only a single moment, but it destroyed us all.

Changing Course: After a tragic accident robs him of a future with his wife, Brett Sharp must let go of the past and learn to love again. But what happens when the woman he used to love refuses to accept the woman he can’t live without?

Stolen Course: After the loss of his fiancee, Caleb Jones is angry and numb. His only goal is to make the woman who killed her pay. But what happens when everything he knows to be true explodes around him? Who will be left to pick up the pieces, and who will need to be saved from the wreckage?

Among The Echoes: After being stripped of her identity, Dr. Erica Hill had long since stopped living. The day she meets celebrity boxer, Slate Andrews, her life drastically changes for the better…and the worse. She’s on the run, determined not to take him down with her, but absolutely unable to let him go.

Broken Course: After the fated accident that killed her best friend, Sarah Erickson is left consumed by guilt and self loathing. But can a second broken soul be enough to fill the voids of her own? Or will such scarred pasts prove too much for love alone to overcome?

Synopsis
I met Sarah Kate Erickson when I was twenty-one years old. I was lucky enough to keep her for seven years before a tragic accident stole her from me. She didn’t die, but sometimes I think it would have been easier if she had.
I lived in a haze for those four years after the accident. Catering to her every need, even though she hated the very sight of my face. I tried to hold on to her and the future that we were supposed to build together. But you can’t hold on to someone that doesn’t exist anymore.
It wasn’t until I met Jesse Addison, a barista at the local coffee shop, that I realized I didn’t just lose Sarah that tragic night, I lost myself as well. Jesse taught me how to let go of the past and learn to love again. But what happens when your past haunts your present and the woman you used to love refuses to accept the woman you can’t live without?
**Intended for readers 18+. Each book in this series can be read as a standalone.**
Stolen Course (Wrecked and Ruined #2)
Amazon US  \  Amazon UK  \  B&N  \  Kobo
Date Published: January 29, 2014
Add to your TBR: Goodreads 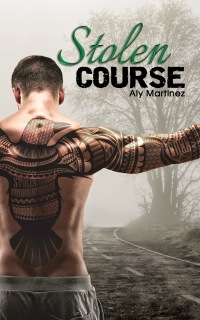 **Each book in this series can be read as a stand alone.**
I fell in love with Manda Baker eight years ago, and I loved her to the core of her soul. We were supposed to have that elusive happily ever after and spend a lifetime together. But that was all before she was STOLEN from me.
Her best friend, Sarah Erickson, killed her. It wasn’t intentional. It was far worse. Everyone claims it was just an accident, but I can see through the lies. Even if it’s with my dying breath, I will make her pay for what she did.
Fate hates me. It robbed me of my first love and left me to navigate through this world emotionless and numb. Then, one day, spiteful fate gave me a woman to fill my shattered soul and make me feel again. It gave me Emma Jane Erickson. Now I spend my days searching for the answers that will ruin Sarah and my nights falling in love with her sister—the one person who is bound and determined to save her.
But what happens when everything you know to be true explodes around you? Who will be left to pick up the pieces, and who will need to be saved from the wreckage?

Synopsis
*Among The Echoes is a stand alone novel which contains material that may be offensive to some readers. Including sexual abuse, graphic language, and adult situations. Intended for readers 18+.*My name was Dr. Erica Hill. I was a victim, then a witness, and then I ceased to exist altogether.I may still be breathing, but stripped of my identity, I have long since stopped living. I am invisible, and my life depends on my ability to stay in the shadows.But he sees me.Slate Andrews is the embodiment of everything I have been taught to avoid. He’s rich and famous, and one image of him with a woman would earn millions for any paparazzi lucky enough to snap it. He has vowed to protect me with his life, yet he exposes me with his every breath. I should be stronger and walk away. I should disappear. But I’m terrified he would come after me.I’m on the run, determined not to take him down with me but absolutely unable to let him go.My name is Riley Peterson…at least for today.

Add to your TBR: Goodreads

Seven years ago, my life changed forever. One accident and the person I saw in the mirror no longer resembled the woman I used to be. I was lost and confused inside my own body. I felt alone and disconnected from the world, carrying the incredible weight of guilt and loss that wasn’t even mine to harbor.Then fate led me to Leo James. He taught me that crazy could be perfectly normal and it shouldn’t hurt to breathe. Don’t get me wrong. Leo isn’t perfect. He has his own cross to bear, and the truth is, that might be why I fell for him in the first place. But despite everything he does for me, learning to forgive myself is infinitely harder than overlooking the flaws of another.Now, the secrets and lies of our past have begun to dictate our future—threatening to ruin us before we get the chance to try. Perhaps we were cursed from the start. Or maybe, just maybe, the remnants of our fractured lives will fit together to form one whole, where love isn’t questioned and being happy is…well, easy.Can a second broken soul be enough to fill the voids of my own? Or will such scarred pasts prove too much for our love alone to overcome?

Born and raised in Savannah, Georgia, Aly Martinez is a stay-at-home mom to four crazy kids under the age of five- including a set of twins. Currently living in Chicago, she passes what little free time she has reading anything and everything she can get her hands on, preferably with a glass of wine at her side.After some encouragement from her friends, Aly decided to add “Author” to her ever-growing list of job titles. So grab a glass of Chardonnay, or a bottle if you’re hanging out with Aly, and join her aboard the crazy train she calls life.
Follow the author at these links
Website / Facebook / Twitter / Goodreads  /  Amazon  /  TSU
Giveaway