This series has just come to my attention. Normally I wouldn’t be suggesting something that I myself haven’t read yet, however this has been suggested to me by several people – all whose opinions I greatly respect. So being the nice person that I am I decided to share the love.

These books while part of a series, can be read as a stand alone. 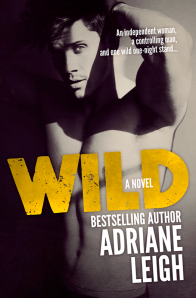 An independent woman, a controlling man, and one wild one-night stand…

Kat Kennedy moved to the rugged coast of Maine to start a new life, but encountered much more than she bargained for in dark, dangerous, and seductive Lane Wild.

Desire and temptation smolder before she succumbs to her darkest fantasies with the captivating stranger. She doesn’t expect to see him again after an explosive one-night stand leaves her breathless and craving more, but just like lightning in the darkness, he shows up in her life at the most unpredictable moments.

A sensual game of cat and mouse ensues before the attraction between them reaches a fever pitch—the magnetism combustible, the sexual tension nearly unbearable—and Kat finally abandons inhibition and explores the cunning, selfish, and sexual side of a world she’s never known.

They have the perfect non-relationship—passion-fueled nights with no strings attached—until life gets real and the past and present collide in a dangerous storm of lust and obsession. 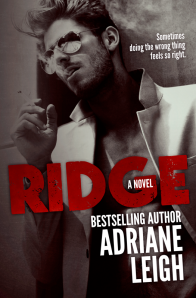 I’m a player. I’m an asshole. I’m someone you should stay away from.

I have demons.
I’ve made mistakes.
And the biggest can’t be taken back.

I’ve gone to hell and back in twenty-nine years and I’m only now coming to terms with moving forward, righting my wrongs, and making amends. Except not everyone deserves forgiveness. Sometimes the damage done is beyond repair.
Everyday is exactly the same. I focus on the pain, in the quest to feel and forget, but I remember everything. When I close my eyes the darkness encroaches and some days it feels like the things that kill me are the things that make me feel alive.

*Ridge, like Wild, is a standalone.
Reading Wild first will provide some back story, but is not required to read Ridge.

And maybe a few teasers? 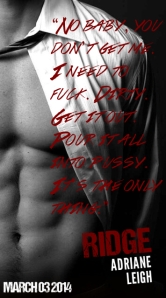